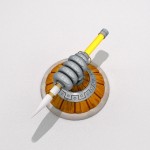 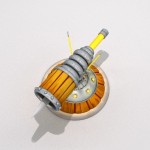 Finally, our sketches made it to third dimension!

Do you remember the post  in this blog where we promised a lot of guns? There we revealed what our new project is all about.  Now some of these pictures are already done in final 3D view and we are sharing it with you for comparison.

In the pictures you can see the most awesome and powerful yet known killing machine.  A rocket-launcher. Of course, as nasty as those space pirates are, you can expect something way more lethal later. First image shows a level one launcher; it alone can blow away anything in front of it. But levelled-up version, with increased range and damage, can bring the hell itself to the Earth (frankly, if you remember, this is the very point of the game).

As for the process of development, we are getting more and more graphics done: the missiles are learning to fly (and destroy, of course), bullets are learning to hurt and the game is steadily getting closer to the stage of an alpha version.